Last year Chris Whong used a foil request to obtain a dataset with information on the locations, times, and medallions for 173 million NYC cab rides. I’m interested is determining which cabs are the fastest cabs are and how quickly they can get between various parts of the city.

Reddit users imjasonh and fhoffa parsed the raw data and loaded it into a public BigQuery table (another version is also available from the NYC Taxi and Limousine Commission) The schema looks like:

As you can see, each ride has very specific details on pickup/dropoff locations as well as start/end times. I am interested in answering questions along the lines of “How fast do cabs get to the Flatiron from the Upper East Side?” which is hard to do from precise latitudes and longitudes. To rectify this I took a 6-character geohash of every pickup and dropoff location. A 6-character geohash buckets together coordinates that are within 0.61km of each other which allowed me to easily aggregate popular routes. An example is shown below (image from movable-type):

The actual computations were done in Javascript using https://github.com/davetroy/geohash-js via a BigQuery UDF.

To make things more human readable, I used the geonames api to map the center of each bucket to an intersection. Not every geohash could be mapped to an intersection this way and those trips were dropped. Data was further cleaned by dropping trips using (hack_license != "0") AND (hack_license != "CFCD208495D565EF66E7DFF9F98764DA") which was observed in a discussion about the dataset.

The taxi stand at East 79th Street and York Avenue has been taking residents of the Upper East Side to Wall Street since 1987. It has 4 stars on Yelp. Each cab moves 2 or more passengers at a fare of $6

Of the 13,347 medallions only a few regularly make the trip from 79th and York to Wall Street. The most dedicated cab drove the route 234 times over the year (only 7 drove it over 100 times): 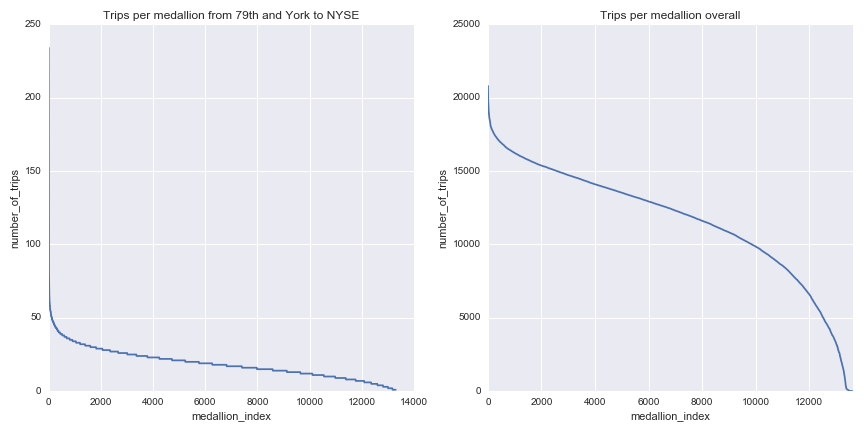 The top 10 most frequent cab share drivers don’t go any faster than most though their average speed is more predictable (probably due to the fact that they often drive at the same time each day). Additionally, when one uses the morning cab share they are far more likely to be picked up by a usual (especially at 5am): 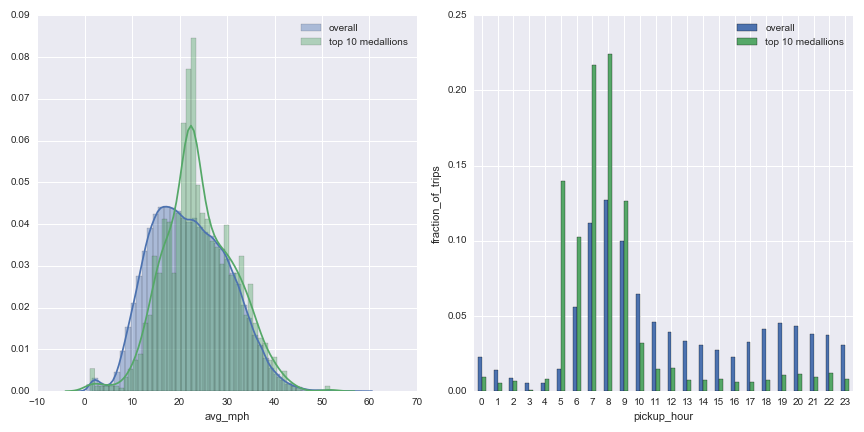